How to Get Pregnant

How to get pregnant overview

Sexual intercourse for reproduction requires the man to ejaculate semen into the woman’s vagina. It’s important for men and women to understand their reproductive organs and how these affect fertility. Women particularly should understand their menstrual cycle and when they are most fertile.

Before a woman starts trying to conceive, she should have a physical exam to check for underlying medical conditions that need to be addressed before she gets pregnant. This is also the time to inquire about prenatal vitamins.

The male partner shouldn’t need an exam, assuming he can ejaculate.

Common questions about sex & getting pregnant

When to have sex to get pregnant

Research suggests that having sex daily results in a 37 percent probability of pregnancy. On average, a sexually active couple has about a 25 percent chance of becoming pregnant (when not having sex on a daily basis). Daily intercourse might be scientifically optimal, however, it may not be personally practical.

Even though timing of intercourse is important, focusing too hard on a schedule can increase stress, which reduces fertility, so it’s important to still have fun during sex.

Here are some guidelines for when and how often to have sexual intercourse:

Struggling to get pregnant? Make an appointment with one of our reproductive endocrinologists.

Determining when a woman is ovulating (the fertility window) 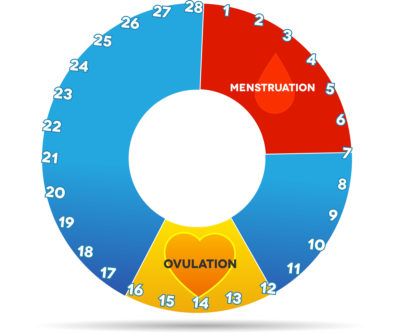 Knowing when a woman ovulates is the most important aspect of having sex to get pregnant (or to avoid reproduction). Ovulation is the release of an egg from a follicle in one of the woman’s ovaries into the fallopian tube, making it available for fertilization by sperm.

Peak fertility time varies greatly from woman to woman, and is also affected by whether she has regular or irregular menstrual cycles. Typically, the fertile window is during the six-day interval ending on the day of ovulation.

There are many options of predicting when a woman will ovulate, including mobile tracking apps, self-examination, hormone evaluation kits, electronic monitors, and temperature tracking charts.

Being aware of the fertility window is useful no matter what method is used, and a combination of methods may be best. Common methods of ovulation monitoring are listed below.

During a woman’s menstrual cycle, hormone levels change the texture and amount of cervical mucus, a type of vaginal discharge. The probability of conception is highest on the day when cervical mucus is slippery and clear, indicating ovulation has occurred.

Pregnancy can still occur when cervical mucus has a different consistency; however, other consistencies are not as optimal. Monitoring cervical mucus is an inexpensive way to track ovulation.

BBT is a woman’s temperature when she first wakes up in the morning. During ovulation, hormones raise the BBT. Basal body temperature charting and tracking is another affordable way to monitor ovulation.

How to chart BBT:

Urine-analysis kits available over the counter track changes in LH levels, which typically surge 12-36 hours before ovulation. Unlike other ovulation monitoring methods, LH monitoring predicts ovulation before it happens, which is the optimal time to have sex to conceive.

How to monitor LH levels:

Lifestyle factors that affect chances of getting pregnant

There is little evidence suggesting specific diets increase fertility, so be wary of claims for a specific “fertility diet.” However, a healthy diet is key for a healthy pregnancy.

When trying to conceive it is best to avoid alcohol, large amounts of caffeine (more than five cups of coffee a day), and smoking. Data suggest they all have marked effects on fertility.
Learn more about nutrition and fertility

Stress interferes with ovulation and may reduce fertility in women. If you are worried about getting pregnant, find ways to relax, de-stress and enjoy the process. LLU Fertility staff can help you with ways to reduce stress, such as acupuncture.

Moderate exercise can increase chances of getting pregnant but too much exercise can suppress ovulation. Women should check with their physician to determine an appropriate level of exercise.

When to consult a doctor

When to consult a doctor