“If you don’t choose to go the path of an egg donor, you might have to say goodbye to your dreams of having a child,” says Debbie. “And that was not something I was willing to do.”

Debbie had more than her age stacked against her when trying to get pregnant with her second child. She was 44 years old, but also has a long history of health issues including lupus, rheumatoid arthritis, endometriosis, osteoporosis and only having one ovary after a surgery to remove the other one due to cysts.

Even with those barriers Debbie and her husband, Kevin, were able to conceive a baby girl 11 years ago. For their first child it took a year of trying and Debbie needed to take Clomid, a pill to induce ovulation. But when trying for their second child, they needed further assistance.

In 2009 during a laparoscopy procedure to prep Debbie for in vitro fertilization (IVF), a fertility specialist at another practice, cut her bowel. This led to Debbie being in and out of hospitals for six months for multiple surgeries that left her with a full abdominal mesh. Doctors were telling her that she would never be able to carry another child.

“Over the next couple years, every time someone would tell me that they were pregnant, or I saw someone who was going to have a baby, or I would see a pregnant woman on TV, I would burst out crying. The want to carry another child never left me,” explains Debbie.

Only having three eggs

“I did not want to give up, so I did some research online and found other women who were blogging and saying that they carried a baby with abdominal mesh. And that gave me a little bit of hope,” says Debbie.

Most of those women were overseas, but it still gave her ambition to get back in shape and talk to her doctors about what she needed to do to carry a child.

Less than a year ago Debbie was cleared by her primary care physician and rheumatologist to try to conceive again. Debbie and Kevin first tried naturally, and when that did not work they went to Loma Linda Center for Fertility & IVF and met with Dr. Gihan Bareh.

“That is when we learned that I only had three eggs,” says Debbie.

Debbie’s low egg count was due to her diminished ovarian reserve, which is common as women age, especially in women who only have one ovary.

“We decided to look into using an egg donor. It was a little tough at the beginning when I learned that the baby wouldn’t have my characteristics if we went with an egg donor. But just knowing that I would still be able to carry another baby made me feel good.”

Debbie and Kevin considered adoption briefly, but Debbie really enjoyed the pregnancy with her daughter and wanted to go through that again. Another benefit was that with the egg donation process, the baby could still have some of the family characteristics from Kevin.

Once Debbie and Kevin decided that they were going to use an egg donor, they started to look through the LLU applicant pool.

“It is interesting, kind of like you are shopping,” says Debbie. “You look at different women and the characteristics about them. We tried to look at women who had a similar family background and activities we enjoyed doing.”

The couple picked a few candidates they were interested in, and the practice reached out to the women to confirm they were still interested in donating their eggs.

Once the donor was finalized, both the donor and Debbie started on medication. The egg donor’s medication stimulates the ovaries to produce additional eggs beyond the normal one egg per month a woman produces. Debbie began taking estrogen pills and using estrogen patches to develop her uterine lining.

After egg retrieval Debbie moved to progesterone shots to prepare the uterine lining to receive the embryo.

“Everything at the practice was very detailed, planned and organized,” says Debbie. “Dr. Bareh was very patient and understanding. Every time you come in for an appointment she spends as much time as is needed, giving you very detailed ultrasounds and making sure you understand all the information she is giving you.”

After the egg retrieval, an embryo was created in the lab using Kevin’s sperm.

How to be happy choosing an egg or sperm donor.

From hopeless to hanging on to her dream 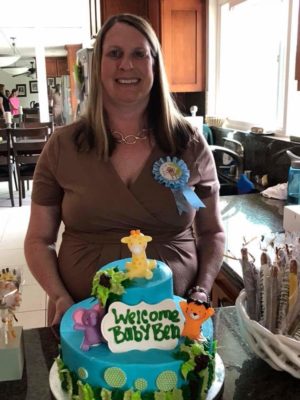 The IVF transfer took, and Debbie is now pregnant with a baby boy. She has continued to stay on progesterone to help reduce the chance of preterm birth, which Debbie’s Lupus commonly causes.

When she thinks back to her decision to choose using another women’s eggs to be able to carry her baby she says, “If you don’t choose to go the path of an egg donor, you might have to say goodbye to your dreams of having a child. And that was not something I was willing to do.”

She goes on to explain, “For many years I was feeling very hopeless because of everything that happened to me. It was hurtful to think that I would no longer be able to have another kid. But thanks to the team at LLU Center for Fertility, I am so excited to say I am pregnant.”

Debbie believes that by sharing her story she can give other women hope to try to have a child and consider an egg donor if it is needed.

“If I didn’t see other women’s stories online, specifically about women getting pregnant with mesh, then I probably never would have gone back and tried again. I am so thankful for those before me who shared their story and changed my future.”

Appointment request / contact
Request an AppointmentContact Us OnlineCall Us: (909) 554-3003