Stephanie had just hugged and thanked the emergency responders who saved her life – then her water broke. 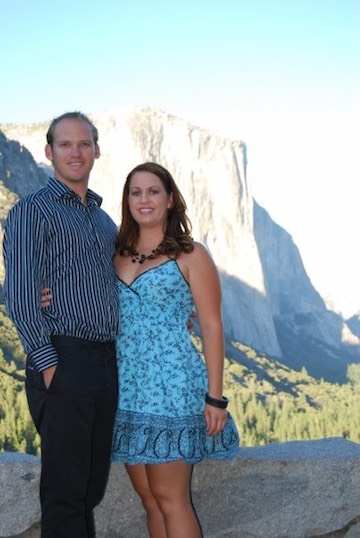 High school romance strikes again, this time for the teachers. Stephanie was an English teacher when she met Steve, who taught math. They started as friends, but one day Stephanie felt that she needed to give dating Steve a chance.

Her feelings were right, and a year later the couple got married on August 1, 2009. Shortly after the wedding they moved to Newport Beach and started to commute to work together.

One topic that frequently came up was their students.

“We tried to look at all of our students as a mentoring opportunity, to have them succeed and grow in different ways, not just in school,” says Stephanie.

Having some of the same students allowed them to bounce ideas off of each other.

After being married for two years, and talking regularly about their school kids, Stephanie and Steve decided it was time to try to have a baby. They made sure they would be ready if it happened right away, but after a year of trying without any luck, they decided to seek medical help.

The doctor diagnosed Stephanie with polycystic ovary syndrome (PCOS). She had previously been tested before for PCOS but was told that she did not have it.

“I was glad a doctor finally listened to me and we were able to diagnose what was wrong,” says Stephanie. “But it was also frustrating, because we would have gotten fertility help earlier if we had known that.”

On top of PCOS, Stephanie learned that she also has a low egg count. This is rare in women with PCOS, because there is usually not the monthly release of eggs.

“It was good learning what we were dealing with and knowing what the next steps were needed moving forward.”

PCOS is the most common endocrine abnormality in women. Learn the symptoms.

The couple was prescribed the fertility drug Clomid. After one month without a pregnancy, the couple talked with their doctor and added intrauterine insemination (IUI) on top of the medication. For the procedure, Stephanie would show up at the doctor’s office when she would have the highest chance of a pregnancy, bringing something with her.

They continued with IUI attempts for a year. The hormones affect everyone differently, but for Stephanie the medication made her depressed and tired. Still wanting a baby, the couple decided that it was time to try the next step, in vitro fertilization (IVF) and started their care at Loma Linda University Center for Fertility and IVF.

Prior to starting IVF, the doctor removed a very small polyp from Stephanie’s uterus, then they started the process to get pregnant with IVF. Stephanie was able to provide 13 eggs with the first egg retrieval. The couple waited for Stephanie’s body to fully heal from all the shots and hormones before moving forward with implanting the embryos.

Out of the 13 eggs the lab was able to help create 10 embryos. At this time Stephanie learned that she had another challenge to overcome: she had an endometrioma, which is a fluid-filled cyst on the ovaries. This could have played a role in why they were not previously getting pregnant.

“With that, we had our 10 embryos frozen, and I was waiting to heal. We were praying that the Lord would protect our babies and would let us know what time was appropriate to have those transferred.”

The Lord led the way to Texas

While waiting for the right time, the couple decided to move to Texas. But before moving they decided that they would transfer two embryos. First the embryologists showed them their embryos through a microscope.

“We got to see our babies right there and see the cells multiplying, and it was so amazing. They gave us a photo to take home of our two little babies as embryos,” Stephanie shares while crying. “We were just praying that they would take and be successful.”

Steve had to move to Texas for work before the appointment to find out if one or both of the embryos took. Stephanie knew it worked because she was ill. Her mom and sister came with her to the appointment, and thanks to technology, Steve was able to see the whole appointment.

“One embryo took, and we were pregnant! It was beautiful to see the ultrasound and great that LLU Center for Fertility was able to cater to my situation to have my husband present at the appointment, even though he was in another state.”

Stephanie then moved to Texas to be with her husband. She was still suffering from nausea and until she found a new doctor in Texas, the staff at LLU Center for Fertility offered her help, answering any questions she had. Before she left California the doctors prescribed her Diclegis and Zofran to reduce her nausea. While they reduced her illness, she was still vomiting around eight times a day.

While in Texas, Stephanie had to go to the emergency room multiple times because she was bleeding and not able to keep food down.

“Every time I went I was worried, but my baby was perfectly fine and normal. They would do the ultrasound and let me know my baby was extremely healthy, even though I did not feel healthy, that was wonderful to hear,” says Stephanie.

Stephanie and Steve learned that they were having a baby girl and named her Kate.

Right before Stephanie entered her third trimester, the heavy bleeding stopped and allowed the couple to head back to California for the holidays to be with their families.

After the new year, the couple went back to Texas, and everything in the pregnancy continued to progress.

On January 7, 2016, Stephanie and Steve were waiting at a stop sign when a man on drugs going 75 mph T-boned into the driver’s side of their car, not stopping after hitting them until a tree stopped him.

Steve died at the scene, and Stephanie was rushed to the hospital. She was suffering from broken ribs on the left side, a collapsed lung, fractured pelvis, displaced organs, fractured sacrum at the bottom of the spine, a concussion and bleeding in the brain.

On top of all of her injuries she was going into labor with Kate. The doctors needed to perform an emergency surgery to fix Stephanie’s largest injuries, the organs that had moved up under her broken ribs. After getting her organs into the correct location, the doctors were able to focus on Kate. They were able to stop the labor and Kate was perfectly fine.

Eleven days later Stephanie was sent home from the hospital in a wheelchair. Once she was back home, people from the fire and police departments stopped by with a gift – all of the items left on their baby registry.

“It was such a beautiful thing for me to be able to hug each one of them. These were the men and women who saved my life and my baby’s life, and it was amazing.”

Right after the folks from the police and fire department left, Stephanie’s water broke. Doctors were planning on scheduling a C-section because of her broken pelvis, but they hadn’t had time yet to make that appointment. Stephanie got to the hospital and had to have an emergency C-section. 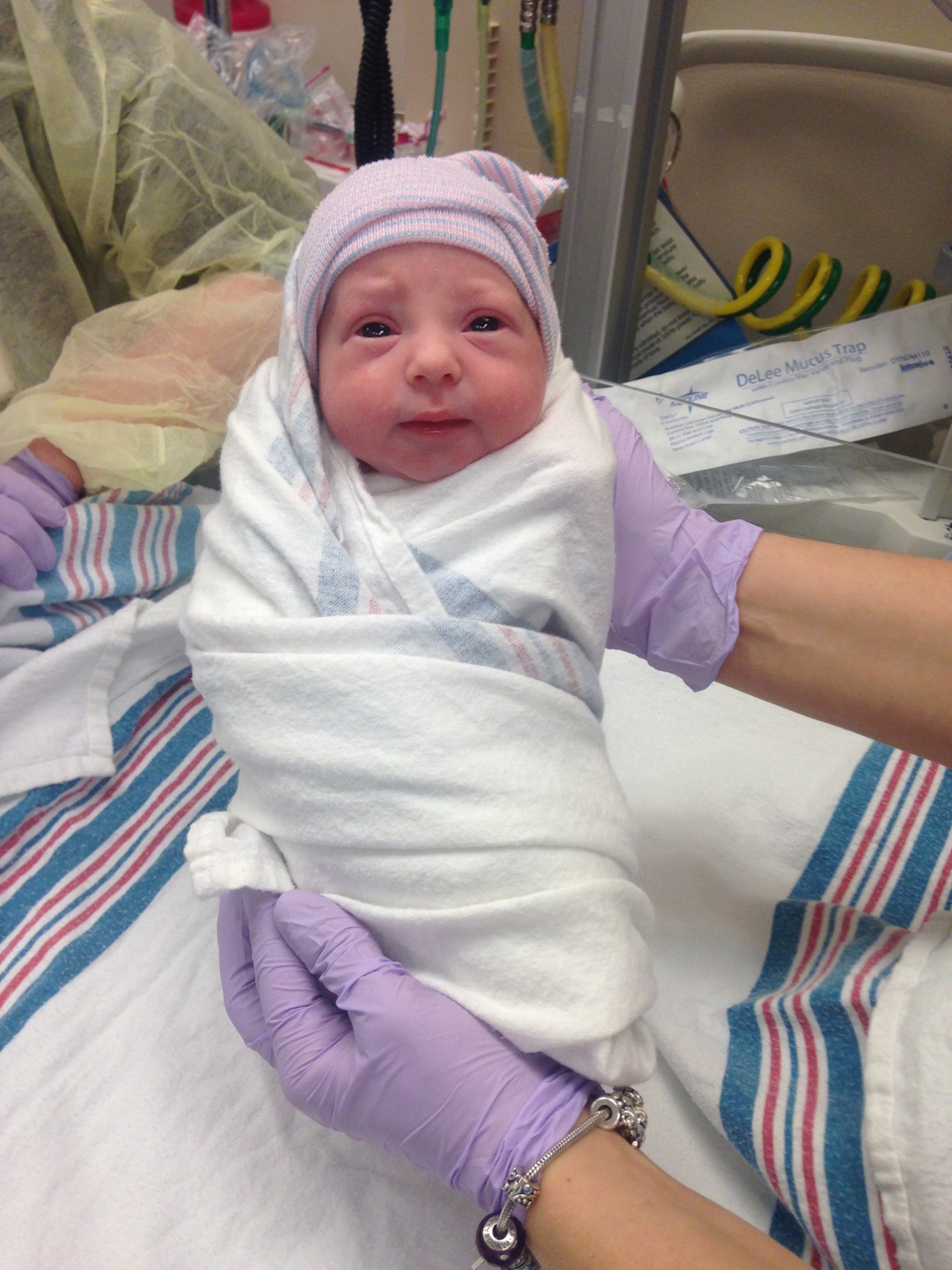 Kate was born on February 10; she weighed 4 pounds, 8 ounces and was 11 inches long. She was healthy and never needed to go to the neonatal intensive care unit. She came a month early, not because of the trauma but because the placenta was abnormally small and could not support Kate anymore.

“At first when Kate was born, I was faced with a duality of emotions, extreme happiness coupled with deep grief. My sweet daughter will never know her dad, here on this earth, she’ll never fully understand how much he wanted her,” says Stephanie. “She will never feel his love. He was such a great man and loving husband, I know he would have been the most wonderful father. He would have been the dad that would have been at all of Kate’s performances, soccer or volleyball practices and games, and school awards nights.”

Once Stephanie was given permission from the doctors, they moved back to California to be closer to Stephanie’s family members who are able to help raise Kate.

“Kate reminds me of Steve in how she dances at all the songs, is very outgoing, is intentional in saying Hello to everyone she sees, wants to eat ice all the time (this one is funny because Steve ate ice all the time and Kate seemed to develop this on her own!). And she even has some of his attributes.

“Kate brings so much joy to me and to everyone she meets. I am so glad that Steve pushed to have a child in our likeness,” Stephanie explains. “Because now that he has died, I still get to have Kate, who looks like both Steve and me, and it is fascinating and beautiful to see bits of my husband come out in her features and personality.”

“I thank the Lord every night as I am rocking Kate to sleep for the gracious blessing he has given to me. It is a gift that cannot be measured. Without IVF, I would not have this gift.”